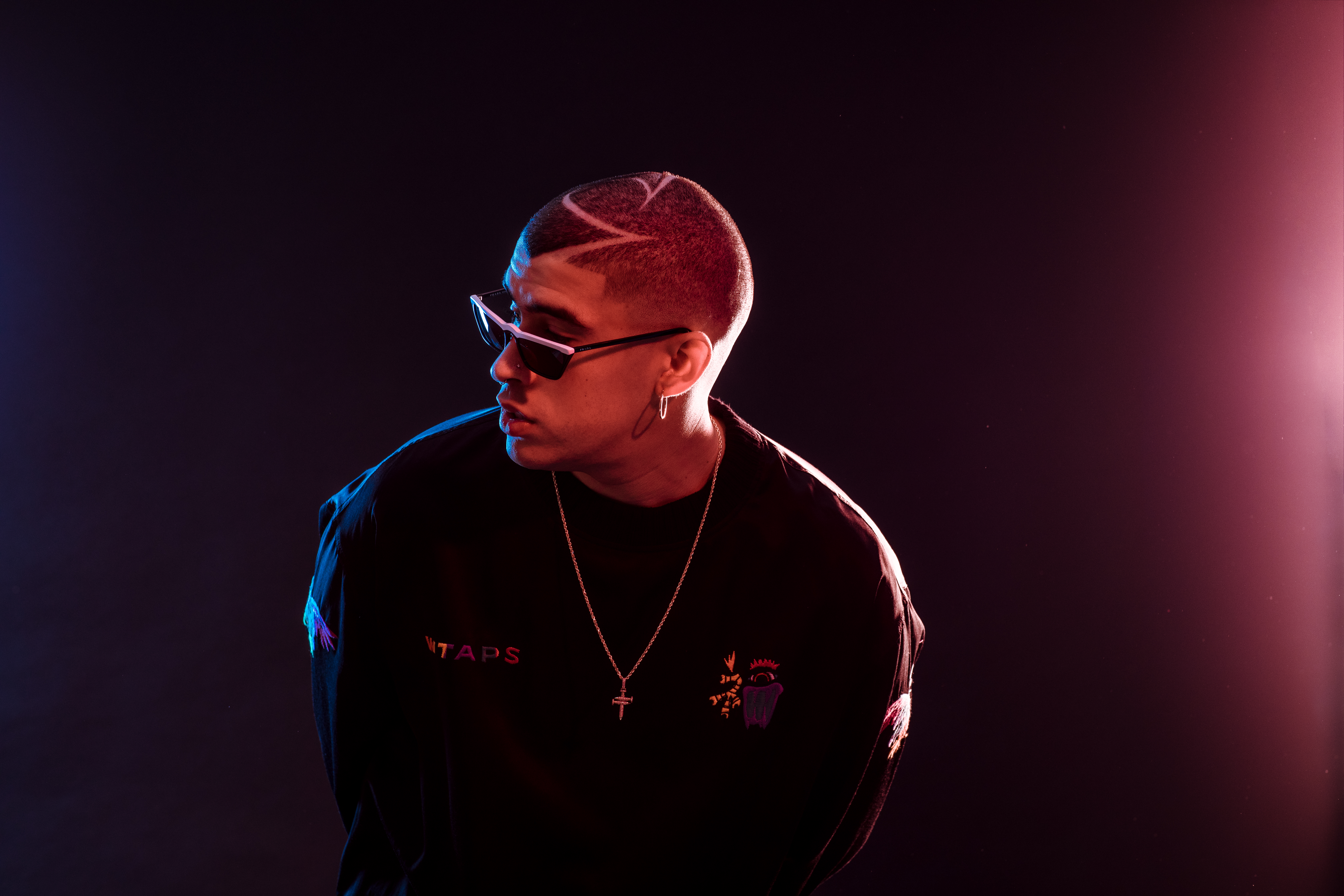 What keeps Benito Antonio Martinez Ocasio or Bad Bunny, as he’s known to the world, on the rise as one of the most influential artists in not only musica urbana, but as a successful crossover artist? Perhaps it’s his ability to adapt and his willingness to delve into different genres and sounds from rock to ballads all in one album. A feat that not many other Latino urban music artists of the new school have attempted. And maybe that is why everyone from your cousin to your grandma has heard his music. That flexibly to change and adapt so quickly, while staying his truly goofy and real self all within the few first years of his career, has put him in a league of his own. Far beyond the Spanish trap genre alone.

The Beginning – El Comienzo
The saying “with hard work you can achieve anything” is in fact how Benito became Bad Bunny. As a college student who bagged groceries in his local supermarket, he was already working towards his goal of a career in music. His side hustle of making music and uploading it onto SoundCloud was his inception into the music business. With parents who loved the classics and his own love of different genres, native to Puerto Rico or not, he gave himself his own musical education. Cultivating the unique sound that would follow him throughout his career. With tracks on Soundcloud and a tone of voice that is undeniable, it was not long until producers DJ Luian and Mambo Kingz, added him to their lists of artists.

With hits that became classic Bad Bunny anthems like Soy Peor and Chambea, he quickly became one of the best-known faces for what would become Latin Trap. If you grew up listing to both hip-hop and reggaeton music of the early 2000s, as I did, you already knew what Trap music was. A product of the southern states that brought the rise of artists like T.I. But this new genre of Trap is for those of us who grew up with Daddy Yankee, Hector El Father, Wisin y Yandel, and several other Reggaeton pioneers. For those of us who love REAL reggaeton and were tired of hearing the beat put on any track for the sake of popularity. Bad Bunny was one of those people who grew up listening to those same artists and easily became the fore leader in the Latin Trap movement. In the end, making music that was fresh for both himself y los que escuchavamos reggaeton Como Antes.

Bad Bunny’s repertoire for mega hits or “palos” have drawn not only an English-speaking audience but wildly successful rappers, artists and DJs who want to collaborate with him. Before his first album even dropped, he had hit songs out with Daddy Yankee, JLO, Marc Anthony and Victor Manuelle, just to name a few. That ability to attract such big names not only comes from his talent but his willingness to collaborate with artists that were in the beginnings of their own careers. Including Becky G, Karol G, Natti Natasha and currently Dominican Dembo artist, El Alfa.

Inspired Entrepreneurs – Enpresarios Inspirado’s por El Conejo
Being able to express his honest feelings on stigma’s within society, his support of a woman’s right to choose what she wants to do with her body and other societal issues, Bad Bunny has been able to connect on a personal level with his fans. That connection has led many entrepreneurs to create their own art using his lyrics of self-love and being true to yourself as inspiration. It’s no surprise that many of these companies hail from Puerto Rico.

Mela Pabon, of Check In Mela – This Astrological consultant and illustrator had a booth in the Coliseo during his recent three-day concert in Puerto Rico. Concert goers including Miss Bala actor Ismael Cruz Cordova, stopped by to get their astrological illustrations. In the past, Mela has given Bad Bunny his very own illustrated horoscope. 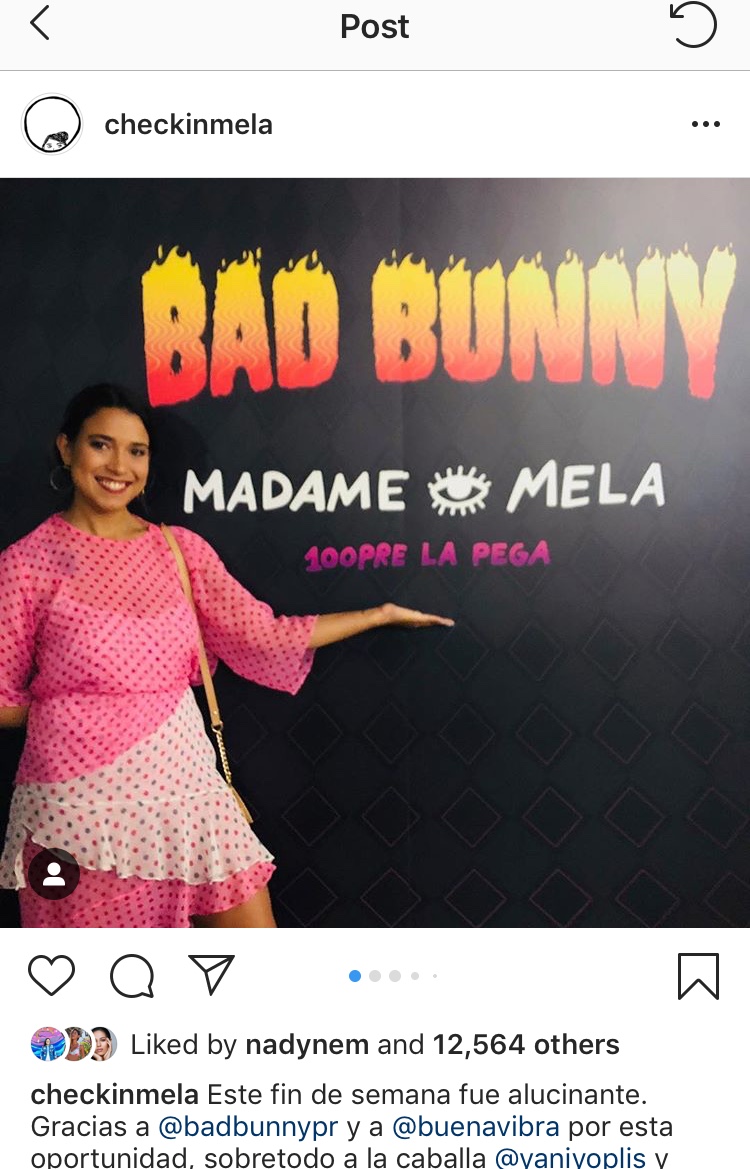 Soda Pop Comics– This comics and illustration brand created by Carla Rodriguez and Rosa Colon, is a company that was inspired by the artist and his support of gender fluidity, as demonstrated in the “Caro” video. Their illustrations show how women even, those that call themselves feminists can enjoy his music. As one of their illustrations says “…if you listen closely, Bad Bunny sings about consensual sex where women are beholden only to themselves and are in control of their sexuality.” Recently Bad Bunny spoke on this issue during a press conference, saying he didn’t change his lyrics for a specific cause but because he believes everyone deserves respect. Does that mean he won’t mention sex, no, but the way in which he does has changed. 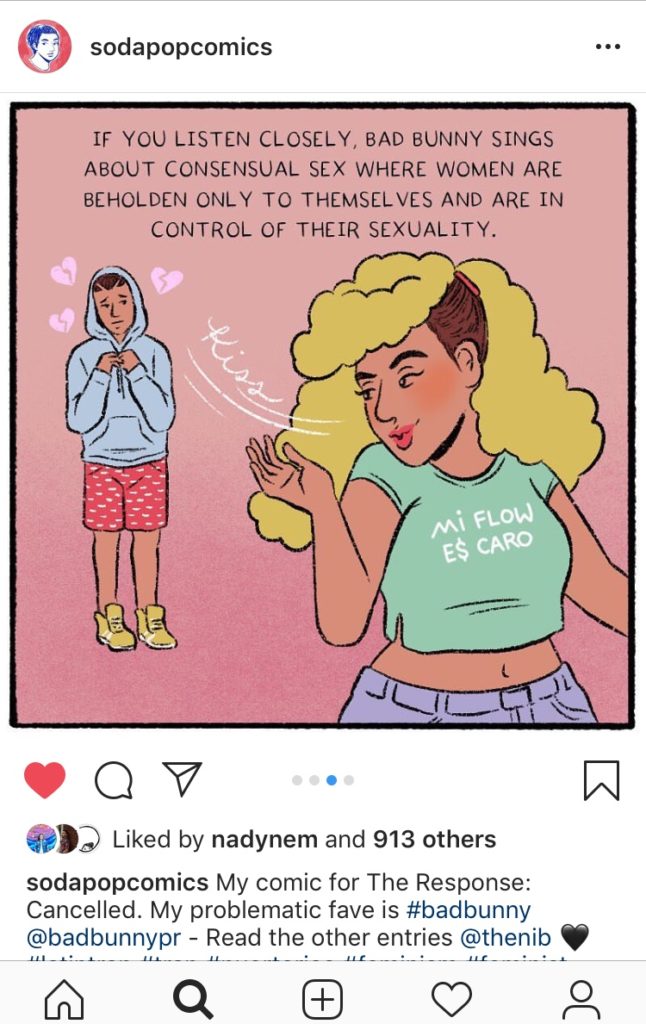 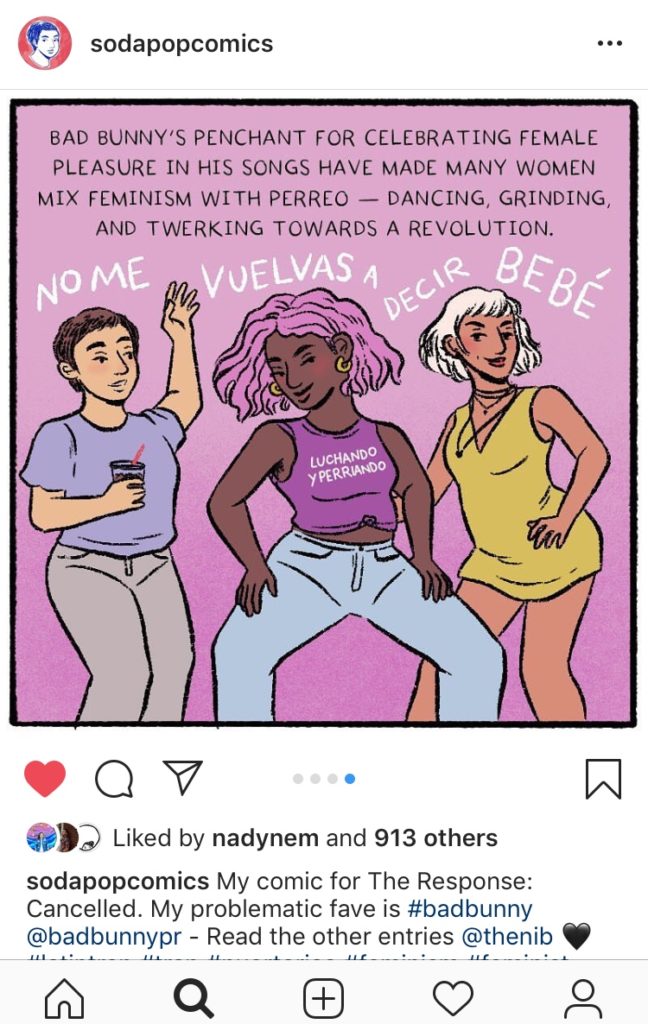 Good Bunny
His ability to speak on the issues of Puerto Rico, without needing to be political, have also led him to give back to his people. With his foundation “Good Bunny” he has held toy drives during the holidays, raised money for children with disabilities and helped his childhood community of Vega Baja rebuild after the hurricanes. In his song “Estamos Bien” he relays the strength of the island and its people to get back up after a tragedy and enjoy life again. The music video relays that same message of humble optimism as he hangs with friends and locals at the beach. This song of positivity once again caught the attention of the English-speaking audience, when Jimmy Fallon invited Bad Bunny on the show to sing “Estamos Bien” and remind the U.S. that Puerto Rico was still recovering. Becoming a fan himself, Jimmy invited Bad Bunny a second time to the late-night show when he recorded a special in Puerto Rico.

This Tour – Esta Gira
Bad Bunny started his current X100Pre tour, named after his album, in his home of Puerto Rico. Selling out the island’s biggest arena the Jose Miguel Agrelot Coliseum, also known as El Choli. With previous collaborators like the legendary duo Wisin Y Yandel, Becky G and JBalvin among others making appearances to sing their collaborative number one hits. Bad Bunny’s love of different genres and artists is already prevalent in this tour as he invited Guaynaa to sing “Rebota” and award-winning producer, writer, composer and singer Tommy Torres to play the piano and collaborate with him during the performance of “Amorfoda”. As he makes his way through the states, we here at Latinista are excited for his stop at Madison Square Garden, his first time ever in the arena. Stay glued here and to our social media channels as we take you there on the day of the concert.